Run the upgrade, via the tools image

The cloud platform tools image has all the software required to run the upgrade.

Start from the root directory of a working copy of the infrastructure repo.

With your environment variables set, launch a bash shell on the tools image:

Before you begin, there are a few pre-requisites:

As mentioned previously; when a new EKS major version is released, it is normally followed by a release of an associated terraform-aws-eks module.

1) The first step of the EKS upgrade is to identify the corresponding module release with the EKS major version you want to upgrade to. Review the changes in the changelog. Plan/make any necessary changes or required updates.

2) Execute terraform plan (or the automated plan pipeline) and review changes. If changes are all as expected, run terraform apply to execute the changes.

3) Create a PR in Cloud Platform Infrastructure repository against the EKS module making the change to the desired EKS cluster version.

4) Execute terraform plan (or the automated plan pipeline) and review changes. If changes are all as expected, perform the upgrade from the AWS Console EKS Control Plane.

We don’t want to run terraform apply to apply the EKS cluster version, as the terraform apply process will take longer and timed out, also to avoid re-cycling of nodes as explained in step 2.

Once the process is completed, AWS Console will confirm the Control Plane is on the correct version. 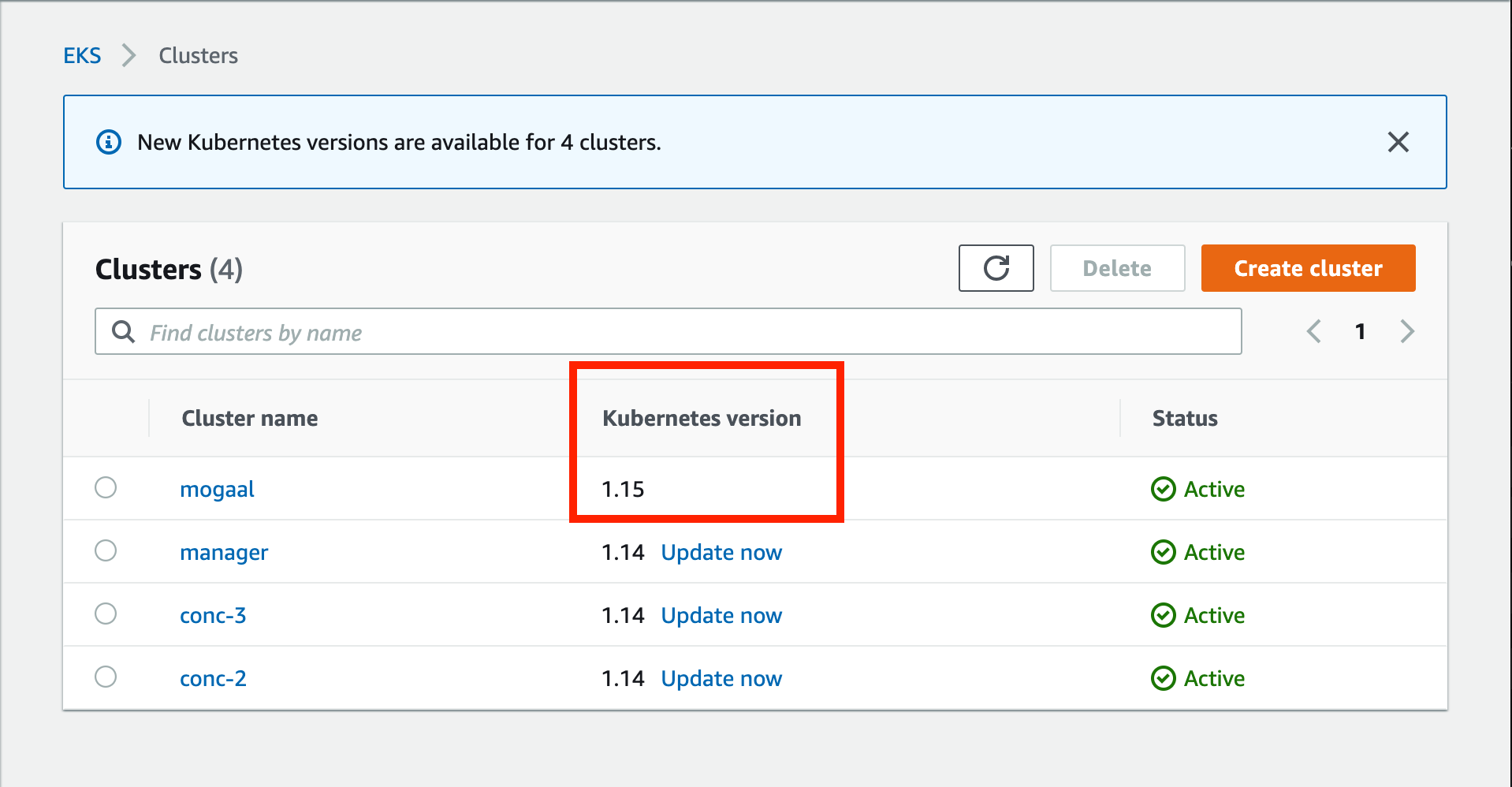 The easiest way to upgrade node groups is through AWS Console. We advise to follow the official AWS EKS upgrade instructions from the Updating a Managed Node Group documentation.

While updating the node group AMI release version, we should also change the launch template version which is created in step 2. To perform both the changes together, select Update Node Group version and Change launch template version options as shown below. Select update strategy as force update, this does not respect pod disruption budgets and it forces node restarts. 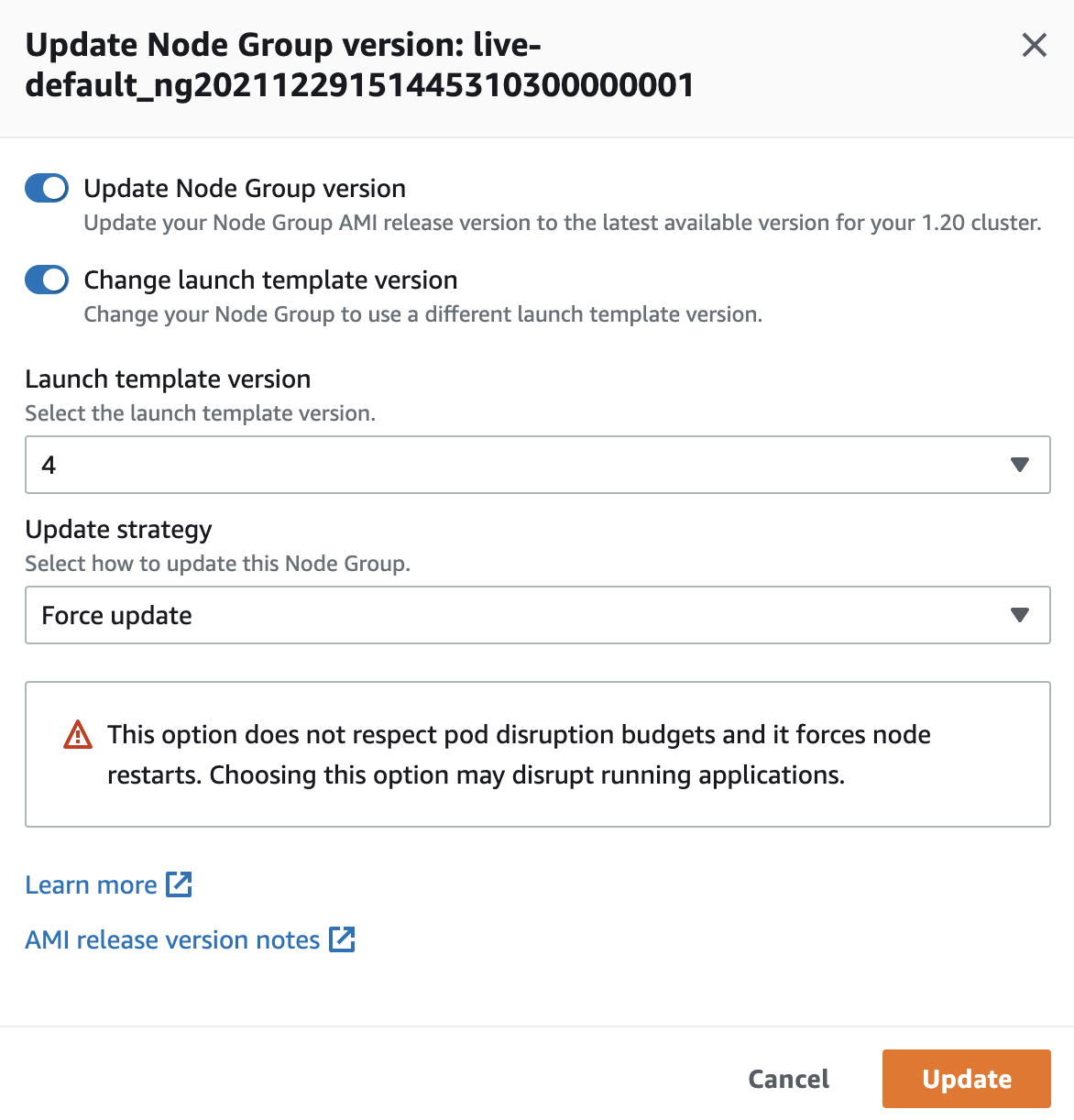 We have 3 addons managed through cloud-platform-terraform-eks-add-ons module.

Refer to the below documents to get the addon version to be used with the EKS major version you just upgraded to.

Create a PR in Cloud Platform Infrastructure repository against the cloud-platform-terraform-eks-add-ons module making the changes to the desired addon version’s here. Execute terraform plan (or the automated plan pipeline) and review changes. If changes are all as expected, run terraform apply to execute the changes.

When we update node group version or change launch template version, we had error “Reached max retries while trying to evict pods from nodes in node group live-default_ng_xxxx”, even using force which does not respect pod disruption budgets and it forces node restarts. The force drain mode can fail to evict pods when there are pods in CrashLoopBack state and PDB is in effect, related to this issue

We can use cloudwatch logs insights with following filter to understand for which all pods the eviction was a failure.

1) Go to cloudwatch logs console, then click on insights. 2) Now in the current window, select log groups which corresponds to Cluster Control Plane logs. For live cluster it is: “/aws/eks/live/cluster” 3) Use the below filter to check on all eviction failures that happened to the EKS cluster

4) After running the query with above filter, you could see all the eviction failures which includes repeated retries performed by the client. 5) The “requestURI” present inside the message in the results of above query will point you on which pods triggered eviction failure. 6) Further to filter out all such duplicate eviction retries you could use the following query.